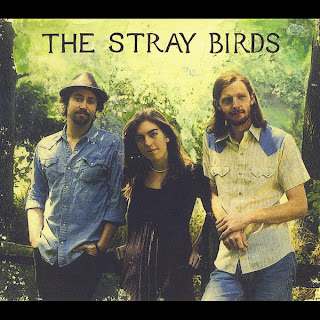 Astute readers of this blog may know that I have mentioned The Stray Birds before, in fact eagle eyed readers will know that I wrote a villanelle inspired by their performance at the Purbeck Folk Festival last year.
They have recently released their first album and I want to review it, but before doing that I thought it would be worthwhile just to tell you something about them. The Stray Birds (http://www.thestraybirds.com/fr_home.cfm) are a trio of excellent musicians who play what I would describe as traditional American music. By that I mean acoustic, violin, banjo, guitar and bass topped off with close harmonies and a lyric that more than nods to the music of the immigrants from England, Wales, Scotland and Ireland. Think of music from the same well as the Carter Family and you get the general idea.
Hailing from the town of Lancaster in Pennsylvania Maya de Vitry and Oliver Craven started singing together in 2010, after they had both spent years travelling and broadening their appreciations of the music of their continent. They enriched their sound by adding Charles Muench on double bass and recorded the ep Borderland last year-I have to say it was one of my most played records of last year.
Their performances at Purbeck were stunning, intense, dynamic and steeped in tradition. It was with a little trepidation then, that I pre-ordered their album, worried that it would not live up to my expectations.

My apprehension was groundless. It is a gem of an album. I am hard pressed to pick out any specific song, both Maya and Oliver are excellent writers, the ensemble playing is first rate and the production does their singing and playing justice. There is a good separation between the instruments and it really works as a whole.

If pressed to name the most played tracks I would have to say Wildflower Honey for the gorgeously sensual vocals of Maya, she is one of the best singers I have heard in a long time. 25 to Life is an incredibly catchy song in the tradition of Hank’s Lost Highway and Harlem and No Part of Nothin’ are fine examples of the songwriters art. Hell, the whole album is well worth a download. You can do that at itunes, cd baby or emusic and you can buy it from the band, who are at present touring the whole of America.

They inform me that they may well return to the shores of Albion in the spring. I for one cannot wait.

Postscript: I just want to highlight another few albums that I am very excited about. The second record by Lizzie Nunnery and Vidar Norheim is released on the 27th and it is wonderful.

Also Annabelle Chvostek has completed recording her new album Rise and it is to be released on 23rd. Watch this space!