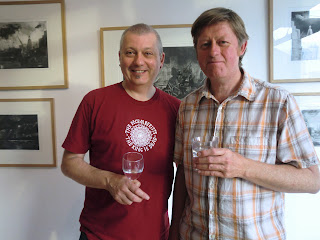 OK, that’s the title of an album by the late, great John Martyn, but I have literally just arrived back from said city and I did have conversations while I was there. Principally with Nick, photographed with me at the private view of his new exhibition, about the possibility of publishing a book of art work and poetry, watch this space. The exhibition is amazing (http://www.paulmcphersongallery.com/2.html ), and would urge you to go and have a look if you are in London over before the 14th.

I met some interesting people and some talented artists-more of those on a future Tuesday Talent post. The evening sky was beautiful and after weeks of drizzle and summer being conspicuous by its absence I thought I would share some of the photographs I took. 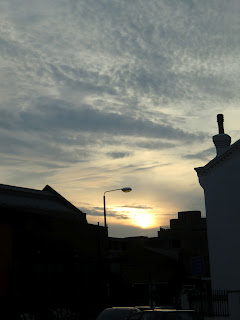 This is the sky outside of the gallery about 8.30 pm. I have not quite captured the lovely herringbone clouds or the intensity of the setting sun. 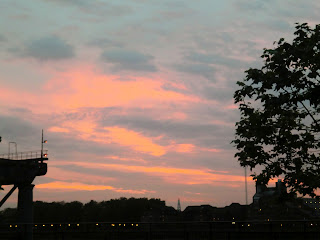 This is outside the Cutty Sark pub by the river in Greenwich. Again I think the colours are a little washed out, but it was lovely just to see the sunset. 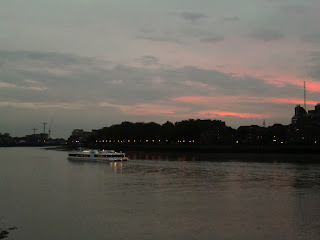 The face of the river has changed over the twenty years plus years I have been coming up to see Nick. The Victorian industrial landmarks are being steadily replaced by anodyne apartment blocks. Last night was the grand opening of the latest skyscraper, the Shard. This opening consisted, from my Greenwich vantage point, of two lasers aimlessly pointing up into the heavens. I was underwhelmed, mind you; do we need more shopping arcades and penthouse flats? I think not.  We are leaving the future a bland homogenous concrete wasteland of franchises and empty buildings. 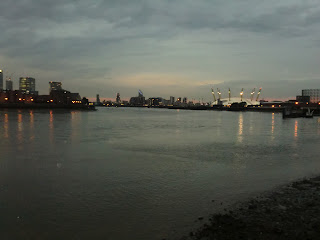 But enough of that. I want to celebrate Nick’s skill and his art. Here is a poem that I wrote back in February after the last time I visited Nick.

He shows me the broken pipe, the stem snapped in half,
A triangle of blue lines on pottery, a jewel of turquoise drift glass,
These things he has combed from the river’s edge.
Later they will fuel his art, their shapes scratched into the plate,
Old London will lie in the curve of a cloud,
This light as it falls on to water,
So the city feeds him,
As he records these moments,
Registers them on copper sheets.
In time to come another will find his work,
Take from it a certain line, that quality of light,
He will swim through the cycles of time.

What do you think? Do we live on trough what we create? Or is it simply the art that survives?
Posted by Paul Tobin at Friday, July 06, 2012