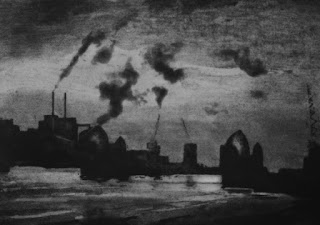 Nick Richards is one of my favourite artists. He was born in Cambridge and studied Fine Art at Bristol Polytechnic and print making at the Royal College of Art. He has lived in London for as long as I have known him and from the 2nd - 14th July has an exhibition at the Paul McPherson Gallery, Greenwich (http://www.paulmcphersongallery.com/2.html).

Nick has been fascinated by the architecture and the landscape of the city for many years. Though I have to say the quality of my scans do not do his work justice. 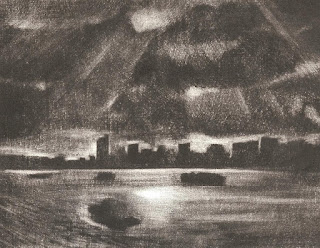 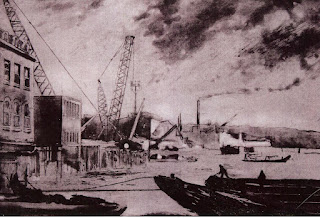 One of the things I particularly like about Nick's art is the dream-like nature of his work. We know this is London, caught though the lens of his eye and expressed a series of line scratched onto a sheet of copper or zinc. But there is an otherness to his work that leads me to lose hours staring into the finished print.

This one on the right was a Christmas card about five years ago. It has sat on my mantelpiece ever since and I delight in the river, its cross currents and reflections. The sunlight breaking through the dense clouds.

The etching on the left is a new one, produced specially for the exhibition, yet I am sure I could walk down that wharf, stop and watch the cranes unload the barges docked on the right.

As I say the quality of my scanner lets down these works of art.

For years now I have been writing poems inspired by Nicks work. I have one hanging in my sitting room, an etching of a man in a suit, hands in pockets walking a tightrope strung high up in the air, between two tall buildings. He is oblivious to his predicament, caught at midpoint on the wire. I wrote this poem, it is dedicated to another of my friends who still works as a social worker.

He walks a tightrope, which does not end,
Some days the details obscure this fact.
I am his inconsistent friend,
Who crashed and burned to land intact.
My life has changed beyond compare,
While he remains to walk that wire,
To make his way high in the air,
And balance the conflicts in desire,
Of a government that does not care
For the disadvantaged and the poor.
That cabinet of millionaires,
Whose selfishness we all deplore.
means spirited beyond belief,
Their arrogance causes us all grief.

I am off to see the exhibition on Thursday and will tell you all about it in the next post. Though that may be Saturday rather than Friday.