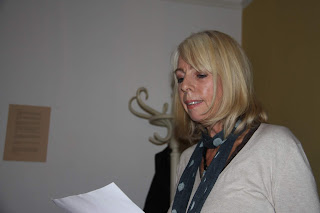 I am pleased to bring to you an interview with one of the best poets in the south west. Regular readers of this blog will know Chrissy Banks. I have reviewed her latest collection and I interviewed her eight years ago. Since then she has published a superb collection, The Uninvited, read all over the south west and been published in too many anthologies and magazines to list.


Tell us about the new book
The Uninvited is the first collection I’ve published since Days of Fire and Flood in 2005. The title refers to the way life offers unexpected, uncalled for events, welcome or unwelcome, that change us when we are forced to engage with them. Love and loss are part of this process, but also poems dealing with a sense of bewilderment, fear, conflict or spiritual drought that has to be faced. It might not sound like it, but there is a fair amount of humour along the way, and ultimately I think, finding acceptance to what is irreversible is key.

The book is published by Indigo Dreams, who are a great independent press in Devon with a really impressive line-up of poets and the best front covers anywhere, largely designed by Ronnie Goodyer, who runs the press with Dawn Bauling. They are true professionals and very supportive.

Why Poetry?
Pablo Neruda said this lovely thing in his poem, ‘Poetry’ about starting to write poetry. Poetry found him, he says - ‘there I was without a face/and it touched me’ and ‘something started in my soul/ fever or forgotten wings’. The whole poem is such a marvellous expression of the way poetry becomes not just something you have to do but something with which you have a vital relationship.


Also I think poetry is the best form of literature for reaching whatever waits just out of consciousness both personally for each poet and in a broader way – the zeitgeisty stuff. Look at how just in the last year or more poems about sexuality, mental health and male violence to women have been pushing out into poetry magazines and readings in significant numbers. Fiona Benson’s Vertigo and Ghost, which speaks so eloquently and forcefully on these themes, has just won the Forward Prize for Best Collection, arguably the top award for poetry in the UK. 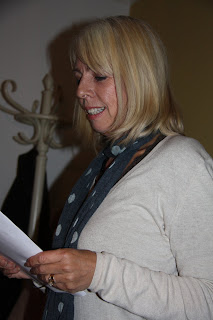 How has the poetry business/scene changed over your life?
It’s changed enormously. The web has seen to that. Since I first started writing, there has been a growing proliferation of poetry magazines and online journals, of small presses, of competitions and poetry awards, of Creative Writing programmes and online poetry courses. Poetry now is much more inclusive and international, no longer is the white, male academic automatically favoured. Perhaps what’s changed most of all is the growth and popularity of spoken word poems and their exposure on social media and via the many spoken word events that have sprung up nationwide.

I’m not sure what it’s like in other parts of the country, but here in the south west the open mic rules. It’s great to hear such a variety of voices and to know everyone can have an audience for their poems. But I have a certain nostalgia for the days when a poetry reading consisted of one or two poets, usually published and often well known, reading for maybe two sets of twenty or thirty minutes each. It wasn’t always an evening well spent, but there was an incentive then to put your own writing aside and just listen to someone else, become absorbed in another person’s concerns, their images and rhythms for a sustained period of time.

How far does real life creep into your work?
What is ‘real life’ I wonder!
Seriously, there is so much of real life that happens elsewhere, so much I’m inevitably cut off from, it’s another reason to be grateful for poetry. Ilya Kaminsky’s narrative of living in an occupied country in Deaf Republic and Jay Bernard’s Surge, an exploration of the 1981 New Cross fire in south London that killed 13 young black people are just two collections focused on experience very different from my own. It’s a privilege to be taken into other worlds like this and it asks something of me. In order to bring them alive inside myself, I have to be open enough to let the words and images work on me, I have to meet them with my own humanity.

I’m talking about the real life in others’ poems, but I guess you’re really asking do I use my own life events and relationships directly in my poems? To which there is no unambiguous answer. I sometimes warn people not to assume, even when I have written a poem in the first person, that it is necessarily about me. I have a poem in The Uninvited called A Serious Word. It’s a sort of We May Need to Talk About Kevin poem, but in this case the son is called Tron. This is a first person monologue, but it’s all pure fantasy, honest! All my poems are somewhere on the spectrum between pure fantasy and trying to describe a lived experience as accurately as possible. An example of the latter might be The Touch or After Captain Underpants, the Big Question, both of which are very faithful to my lived experience from the past.

Of course, I always want the reader to think that what I’m expressing is real life. I am disappointed if I write something that doesn’t seem ‘true’, whether it is or not. I have a whole series of poems about individual people. Again, some are people I have known, others completely fictional or with disguises or fictional elements thrown in. Some I needed to write for myself, but they will never be published for privacy’s sake, mine or the other person’s.


My last thoughts are about how very very difficult I find it to write about some of the big stuff that really matters to me. I’m thinking about the political state of the UK, the damage caused by years of austerity and the impact of Brexit. Climate emergency too – where do you begin? Then there is so much still that needs feminism to keep speaking loud and clear. I guess this takes us back to ‘real life creeping in’. What else is there? But sometimes the big stuff needs to be approached via the seemingly smaller stuff. The personal truly is political.
Posted by Paul Tobin at Sunday, January 12, 2020