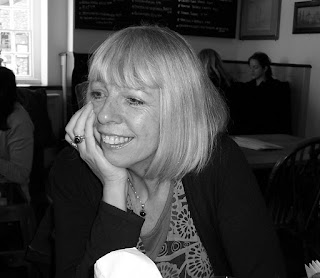 This week I am interviewing a poet whom I think is one of the most gifted I know Chrissy (or Chris)  Banks. She has been a member of Fire River Poets since the start, is a well known local poet, with a national presence. In the past Chris was selected for the Best Poem category by Smiths Knoll magazine in their Forward Prize. She is one of those accessible poets that easily chime with most people, so easily in fact that you may miss the high degree of skill that goes into making her work so accessible.  Don't just take my word for it check out her poetry site: http://www.chrissybankspoetry.weebly.com/

There is much to like in Chris' work, she is one of those poets who write with a musicality and from the first line offer you a complete world, a world that simply draws you in. She is also one of the most acute analysts of poetry I know. She is able to offer very sensitive and constructive feedback on work in a manner that respects the individual. OK, I confess I am a fan.

Her book Days of Fire and Flood is excellent. Here is a poem:

Hello. And welcome to our service helpline.
Demand is high at this specific time
and all our helpers currently engaged.
Your call’s important, so we’ll play for you
Vivaldi, while we hold you in a queue.

Demand  is high at this specific time
and all our clients currently enraged.
Your call’s important for our revenue.
We’ll play Vivaldi while ignoring you
and watch our profits make a steep incline.

All our staff are currently enslaved.
Your call’s a chore they’d rather not pursue.
They’ll play Vivaldi and leg it to the loo
while you are left to dangle on the line.
Demand is high and they’re on unpaid overtime.

Your call is still important, so we’ll cue
Vivaldi for the umpteenth time and coo
smooth, pre-recorded clichés down the line.
Demand is high, and we are doing fine
pretending that the customer’s assuaged.

Vivaldi’s endless seasons torture you.
Welcome to their service hindranceline.
Endure it only if you have the time
for operators constantly engaged.
Your call’s important, but you won’t get through.

© Chris Banks
Published in my anthology ‘Days of Fire and Flood’

How did you get started?

I started writing poems at a very early age, probably about 6 or 7. I learnt to read and write when I was quite young and, unusually perhaps, we also read a lot of poems at Primary School. I think the music and emotional intensity of poetry got inside me back then and has stayed with me as a powerful force ever since.

Taking a degree in Literature made me too conscious of the chasm between what I produced and the great contemporary poets I was reading then, many of them American, so I stopped writing poems for a while. Then in my early thirties, I started writing poetry seriously. I had three young children and I wanted to record something of my experience as a mother. Nobody very much was writing about children or motherhood back then – or if they were it wasn’t being published. I entered a poem about babies for a competition judged by Roger McGough and won first prize. That was a real boost. Then I started having poems accepted for publication in magazines. One poem I wrote back then, The Gift has been anthologised several times over.

I am relieved that I no longer find myself writing ‘in the style of’ when I immerse myself in someone’s work, but I hope I incorporate elements of what affects me in their writing, by osmosis. I like to think that’s how it works. What kind of strange poet-creature would you imagine emerging from a mixture of the above names?! Anything like me?

I am also influenced by the observations of those in various writing groups I belong to and professional poets who have mentored me on courses or individually – their views and feedback are invaluable. If several people are saying ‘that line doesn’t sound right,’ you have to rethink it even though you may have been very pleased with it initially.

Where do the ideas come from?

Usually, a random event or experience, something I hear or read, causes some kind of emotional response in me that makes me curious. In writing about it, I am following an emotional note to discover the rest of the tune. Sometimes I get on the trail, but it peters out or takes me round in circles. It’s so hard! But compelling.

How do you go about constructing a poem?

I used to get a phrase or a line in my head and I’d take it dog-walking with me.  Literally. Walking is great for letting the mind off the leash to free associate.  After the poem had grown into some kind of shape in my head, I would then transcribe and rework it, both on paper and in my head on further walks. Now I no longer have a dog and the whole process has changed. I tend to write straight onto the laptop.

Is there anything you would have done differently?

Without an extra parallel life, probably not, much as I would have loved to give over more time to writing poems. By the time MAs in Poetry were springing up everywhere, I was committed to training and working as a Counsellor and Psychotherapist. I have a family. There’s only so much one ordinary woman can do.

What advice would you give to someone starting out?

First and foremost, write for yourself, to find out what you didn’t know you knew or to express something for your own satisfaction or because you love language and rhythm.

Then, if the art of poetry is important to you, make sure you read. Get hold of some good contemporary poetry – anthologies such as Bloodaxe’s Staying Alive, Being Alive and Being Human are a great starting place for sampling different poets. Subscribe to a magazine such as the Rialto, Magma or Poetry London. Learn from what you read how to construct a poem, how the poems you most appreciate achieve their effects. Join the Poetry School and use their services. Join a poetry group where you can get objective feedback from a range of people. If you can afford it, take one of the Arvon Foundation’s courses.

And let’s not forget, write! Make an undisturbed space for yourself somewhere and get into a writing routine. Don’t be content with the first draft. Almost all poems can be improved. Publication, or an audience, may come in time, but don’t expect it to be easy. Be prepared to submit first to poetry magazines and online poetry sites and to read at open mics before even thinking of a collection or a full reading. Expect to get many rejections, but don’t let it stop you writing.

If you were a poem what poem would you be?

This is such an interesting question. It changes all the time, doesn’t it? I have been, for instance, Sharon Olds’s Looking at My Children Asleep, Robert Frost’s The Road Not Taken and others, but not now. One poem that has stayed with me, resonating and feeling close to me over many years is Adrienne Rich’s Diving Into the Wreck. If you want to know more, read it. It’s a great poem and would find relevance, I imagine, for most poets as well as anyone who, like me, works as a therapist or is in psychotherapy or simply has an interest in the deeper layers of the mind. The poem is about deep sea diving and this serves as a metaphor for going down into the unconscious and finding ‘the damage that was done and the treasures that prevail.’

Whats in the pipeline?
Thanks to the amazing organisational skills of poet Sue Boyle, I was recently involved in a small way with quite an exciting project called Faces Bath, which was a collaboration between poets and portrait painters that culminated in a sound and visuals event at the Bath Royal Literary and Scientific Institute.

Now that’s over, there’s the usual business of crafting poems, trying to improve my own personal best. I would like to think I may have another collection in time, but I will have to start sending out to a few publishers if I want to make it happen! I seem to be dragging my heels on that one.

Also, I have finally got round to creating a website, www.chrissybankspoetry.weebly.com  Please do visit it, read some of my poems and give me feedback.

Chrissy's website is worth checking out. What are you waiting for?
Posted by Paul Tobin at Tuesday, November 27, 2012