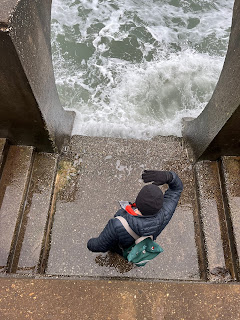 I  wonder why the present government does not just call it a day. Twelve years of tory misrule and every aspect of our lives is worse. Honestly they are, as my mother would have said, an absolute shower. Here's a new poem inspired by my mother's superstitions. She always maintained that death come in threes.

I hear of two so search for the third

as death always comes in threes

this is a hard and fast law

my mother steered our family by such stars

bad things can happen any time

and she interrogated every cup for omens

but none were as accurate as


she never held with teabags

until she was old

and the cataracts had clouded her eyes

until the Coop shut

all three shops in the town 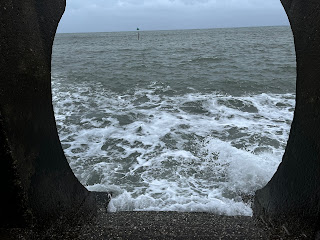 I've been working away on this poem for the last two weeks and I think it's roughly about there. They've jazzed up the packet but you can still buy Indian Prince. These days though I only drink green tea and am partial to Mao Feng. Like my mother I do not hold with teabags. What do you favour? 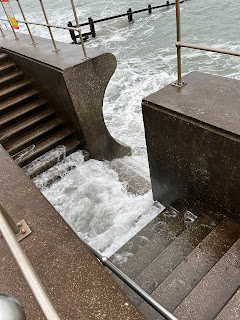 I feel I have to leave you with Stevie Wonder. Superb.

Until next time.
Posted by Paul Tobin at Friday, January 27, 2023 No comments:

AN INFINITE FIGURE OF EIGHT 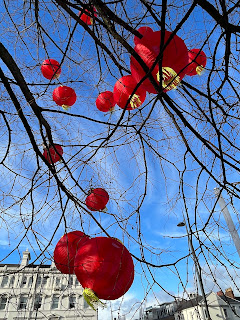 This weekend is Chinese New Year. I was in Liverpool last week and the photographs in this post are from there. The poem is revised thanks to the Secret Poets and their skill. You can read the original here.

How to Weave a Rope of Water


after being slung into the air


there is a second

when the mop bucket's contents

seem to just hang in the air


if only you were quick enough

you could weave the water

into a circle or an infinite figure of eight


but then there is the belly flop

on to the crazy paving


every time this happens

dreaming of their lives as clouds

when defying gravity is effortless 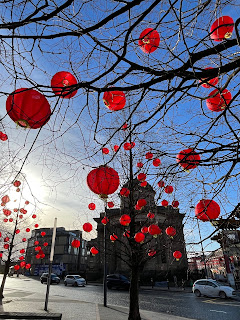 As you can see, much has changed. New title, revised lines and I hope a more succinct poem. It always helps to discuss your work with sympathetic friends. 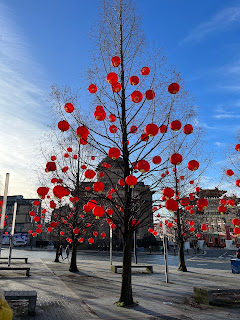 The Mountain goats have a new album out, you can buy it here. This is We Walked In The Cold Air. 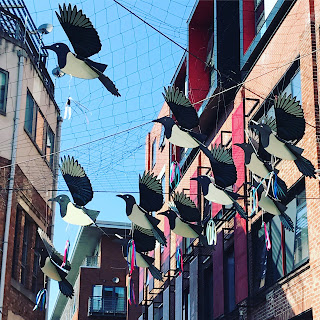 Sometimes I am moved to go back, for some reason or other, and revise an old poem. I came upon this one recently and played about with it.

She laughs at the little boy

who rolls a pink toy pushchair

away, and back again

who delights in the motion of the wheels.


Then she makes her judgement

he will need gender realignment.

She knows how real boys behave

she has a son and he sits very close


and I have made the sin of contradiction,

this is why she laughs at the pram pusher.

Gender cannot be a social construction

that changes over time and culture.

She knows better, she is a mother.


I debate telling her that once

but this would just prove her point

that she is correct in her judgement.


Her best friend has married me,

obviously I have turned her head

are susceptible to that sort of thing. 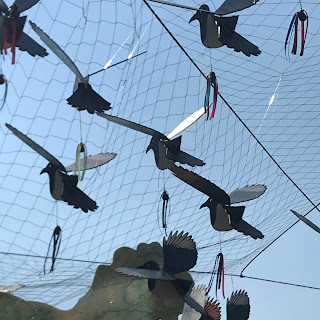 You can read the original here. The layout is different and I've altered some of the lines. It can be an interesting exercise, although there is always the danger of overworking the poem. 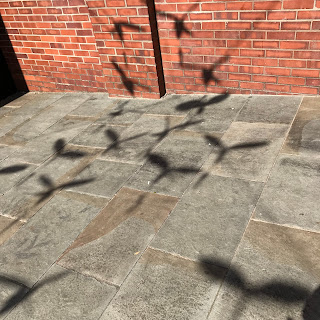 This next poem is reportage. I recently watched a white van back into a Keep Left sign and scarper.

popped off its plinth intact


he not pause to assess the damage


not even when the man

[whose hand signals had guided

his big white van out of the drive way]


he did not stop

he did not look back

he made a clean getaway 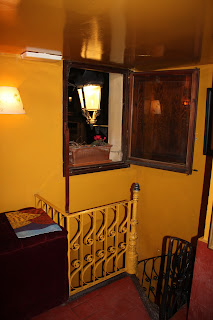 It is more of a writing exercise than a poem, but I thought it worthy of inclusion. 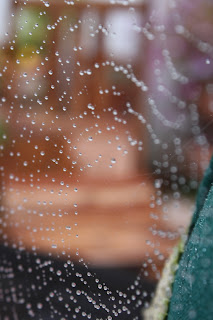 Footshooter has a new video out. His new album came out the end of last year. It's well worth hearing. 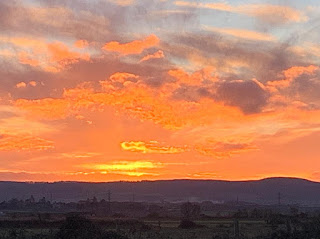 The sunset on the 2nd January 2023 was stunning. I have been discussing it with the Secret Poets. We have been exchanging photographs and thinking how we must write something. I have not written anything over the festive period and this morning the words did not want to come.

THE POET LOST FOR WORDS

WHEN CONFRONTED BY A SUNSET


today the Broca’s Area of my brain

has become the Amazon rain forest

all trees chopped down

scattered in the letters

that flee from the chainsaws

to peek from what foliage is left


I look at the sky

think how to begin...a river of lava

too close for comfort

of all watercolour sunsets


so I take a deep breath

at just what it is to be human 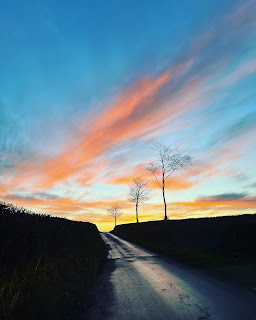 Yes, it is another poem about writing. I could not approach the beauty of the sunset any other way. My words were trite. Here is a revision of a much earlier poem. You can read the earlier draft here.

You meet her under an umbrella.

you exploit my passion for camouflage.

She brings along her husband

who claims he once roomed

with a bloke who made a CD.

You face him across a round table

no one looks at anyone else’s eyes.

Confirmation plays and the husband knows it.

I can remember not one note

but you two lean as close as you dare.

Outside in rain, after stilted farewells

I ask you what the hell you are about.

You quote someone else’s poetry

I shake my head and unlock the car. 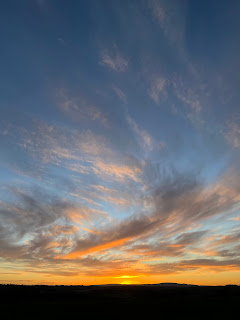 I think this version is neater, whether it is better I leave to up you. 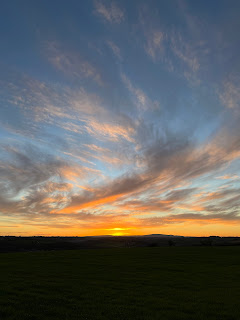 Black Stalin, the esteemed Calypsonian died last week. He will be missed. I leave you with Burn Dem.

ALL WILL BECOME CLEAR 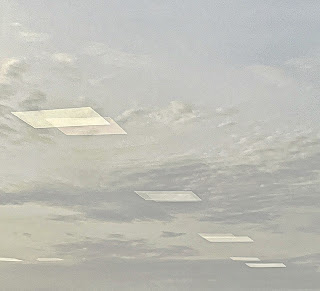 Recently I have been using the Goat Island book of creative exercises to spark the muse. I have mentioned it before, I was given a copy by a friend, who swears by it as a means of unlocking creativity. It is certainly sending me in different directions to my normal process.


feet off the floor


and here you are

rocking in the breeze


your shirt your sail

tack into the wind


there is now no rule book

all will become clear 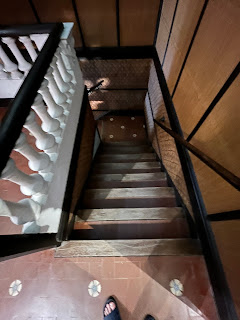 I like the idea of being weightless and floating down the road like a sailing ship. There is a dream like feel to the concept. This second poem is about a print I have had for many years.

WATCH THE BACK OF YOUR HEAD


she had stood in the bathroom

early digital camera over her shoulder

the trick if there was one

maximise her back her neck

that half of the head she never sees

etched on a plate

and sold to me over twenty years ago 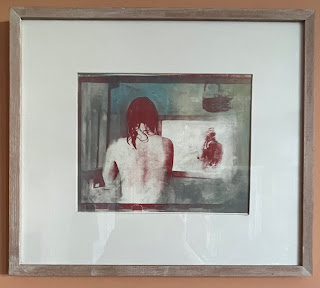 The direction to watch the back of your head could have involved physicality, mirrors or a periscope, but it reminded me of the print. I am always unsure about poems based on art works as without the illustration it is difficult for the poem to stand alone.

Here's Iron and Wine with Calexico. 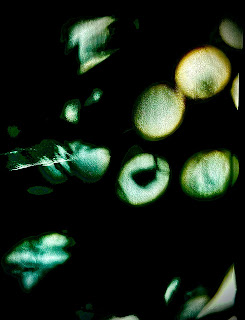 Thanks to the Secret Poets for yet again making sense of a poem for me, much appreciated. This poem appeared a couple of months ago, you can read it here. Dreams are important to me, I think we gain insight as we sleep. Occasionally I awaken with a poem in my head, though this one materialised one morning as I jotted some other ideas down.


you’ve been in my dreams again


I can’t blame the times or the season

for this spate of visitations

you are always thirty


now I am old enough to be your father

and the last witness to what we had 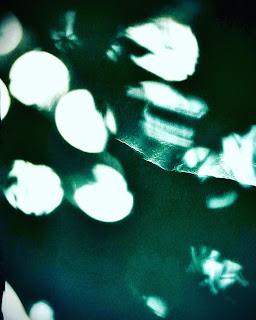 I am not going to go into details. I'm just going to leave it here. 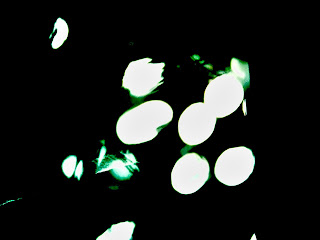 Sadly this week Terry Hall died at the young age of 63. He was part of my youth and I have always followed his career with interest. He will be missed. 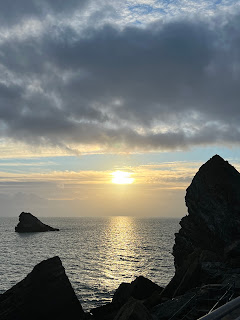 Since we moved to Torquay nearly five years ago the weather on the shortest day has been cloudy or wet. This year was different and we were able to great the Solstice and celebrate the coming new year. 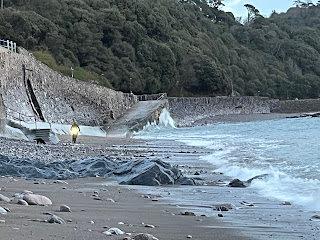 Sadly it is too far to drive to Avebury to celebrate with the other pantheists, from Taunton it was a good two hours but it would be over three now. So we celebrated at our beach hut. 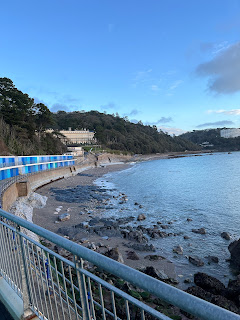 May the coming year bring you happiness and peace.

Posted by Paul Tobin at Thursday, December 22, 2022 No comments: