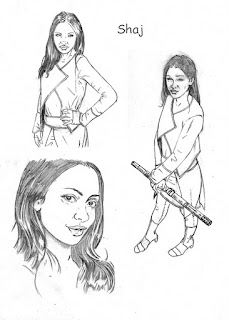 More about CO2 this week. This is Shaj, she is the hero of my series. Her full name is Shaj Ophelia Pankhurst and she grew up in the Shogunate of Nippon, a client state of The Church of The Holy Footprint. I feel that there is a need for some background before I continue with Shaj’s life story.

Following the overthrow of the corrupt Tory government in 1807, there was a period of dislocation, not only in The Isle of Albion, as the British Isles had been renamed but also across the empire that the aggressive Tory expansionism had created. Out of this chaos rises The Church of The Holy Footprint, legitimised by the Chelsea Concord of 1820. The Church argues that the destiny of the Isle of Albion is to re-balance the world-to return it to the state it was in when first created. It cites the visions of William Blake as its inspiration, failing to comprehend that Blake, like most poets was talking in metaphor.

Though there is a practical aspect to this, the disciples of Joseph Bramah realise that there is a very real danger of the temperature of the world being raised by the technological developments of industrialisation. They see the vacuum left by the fall of the dishonest and corrupt Tory government as an opportunity to change the world in a such a way as to forestall that climate change.

The empire created in the time now known as The Tory Misrule is forcibly brought under The Church’s control. The Church being no less aggressive than the dissolute, corrupt Tory’s before them. As The Church conquers more territory some existing countries become their allies, foremost amongst these is the Shogunate. There are advantages in this for the Shogunate and its policy of isolationism. Over time there is an interchange of ideas and technologies between the two states. In fact by the time The Church finally manages to conquer the Dragon Empire an elite squad of samurai assist them.

By the time Shaj is born, it is possible for outsiders to live in the Shogunate. Shaj’s family are merchants, originally from the Indian Subcontinent, who have profited under The Church. They have a thriving export/import business and Shaj grows up in Kyoto, the capital of the Shogunate. She is attracted to the way of the warrior and shows exceptional promise, over time, against the wishes of her father (this world is a male dominated) she trains to becomes a samurai.

To stop, what her father regards as her foolishness, Shaj is betrothed, against her wishes, to the son of a fellow merchant. Shaj then disappears and leaves the Shogunate. In her world it is difficult for women to make their own way and Shaj becomes a guard for a consignment of precious stones being transported to Iroquois League. This is the beginning of ten years as a Ronin (a samurai who is adrift from the patronage system) wandering throughout the client states of The Church.

At the time we meet her, she has settled in Liverpool and works as an independent guard for consignments and people. It is in Liverpool that she meets Ryan....