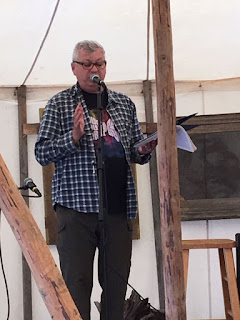 Two weekends ago I was invited to the Tropical Pressure Festival to run a poetry workshop. What a lovely little festival it was!
Firstly thanks to Nikki, Marcel, Mike, Alison, Luke, Mark, Sarah and Mike for attending said workshop and putting so much effort into the exercises. 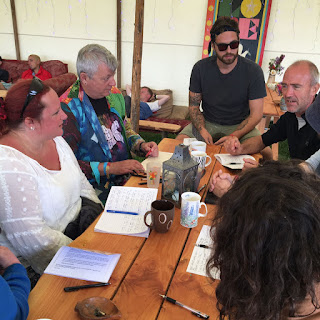 Here's the poem [in a rough draft] that I wrote in the workshop.

Miles Davis on his t-shirt,
he's got his mojo back,
is coolness in human form
and now the world is music.

Christine makes the yeast rise.
He holds her in the night,
warm, safe, unaware
of how little time they have left.

The situation is fluid,
but Bernard is married to his bricks and their mortar,
he will sink in the flood that is to come.
His son mirrors his certitude,
fights a rear guard action.

On a beach I will return to in my mind,
I can still see you. 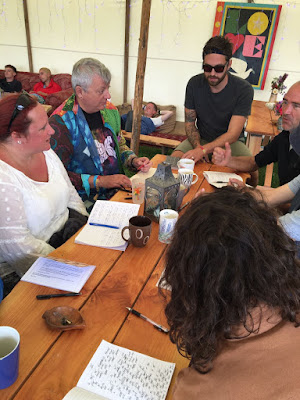 It is still too oblique to really work on a universal level yet, but it is worth persevering with.
Here's a video of me reading London Conversation. Thanks to Alison for the video. You can read the poem here.
I leave you this post with Judee Sill.
Here's a documentary about her. It's well worth a listen. 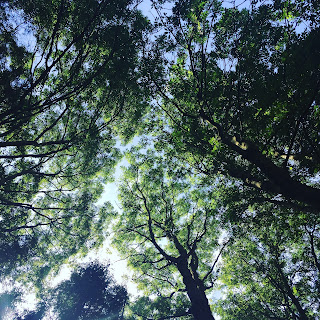 This poem arose from the notion that a person from the past that we conjure into existence inside our heads could have conscious thought. That they could narrate the scene/memory from a different perspective to the individual thinking them.

Here I am, however briefly, in his thoughts,
ordered by a steward to stand on this spot,
given appropriate clothing
[nothing I would have chosen for myself],
and told exactly what to say,
some badly written supporting dialogue,
[not the words I spoke at the time,
or even a rough approximation].

I have been thought into existence before,
not very often, usually when he needs
to illustrate his marvellous achievements,
and the nobility of his actions to some new acquaintance.

I step forward to speak my lines,
words of gratitude,
how I could only ever have respect for the man.
I stand in his consciousness,
one of many phantoms,
who bow and scrape and thank him
[the opposite of what happened in real life].

As I said this sort of event doesn't happen often,
usually the likes of me never enter his head,
not even for a second. 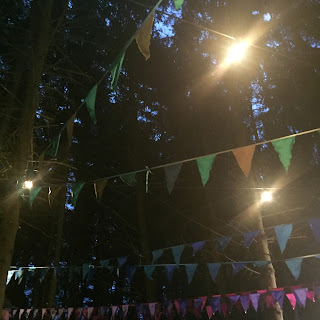 I was reading at 2000 Trees Festival last weekend and had an excellent time.
It is my third year there and it keeps getting better. Thanks to Rob for the invite.
Here's a video from Will Varley who was a highlight for me.
Until next time.
Posted by Paul Tobin at Friday, July 14, 2017 No comments: