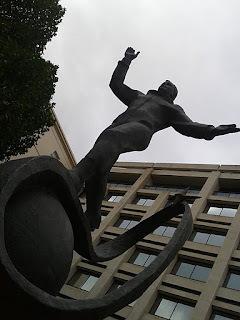 When I was in London recently I took the time to look at the Yuri Gagarin statue, which is outside of the British Council offices in Spring Gardens. The statue had been given
to the British council by the Russian Federal Space Agency to mark the 50th anniversary of Manned Space Flight. I had heard about the statue via the website Yuri’s Day , which exists to celebrate Yuri Gagarin and the work of Sergei Povlovich Korolev, the great scientist who developed the hardware that took Yuri into space.
I wonder if you have to be a certain age to be excited by human’s attempts to go to outer space? I grew up during the Space Race and followed every development, I remember hearing that a human being had circled the planet and safely landed, I was five and I never forgot the name of that man – Yuri Gagarin. I was twelve when he died in a plane crash, thirteen when Armstrong and Aldrin landed on the moon.
Now we have turned our backs on the stars and I for one I am sorry that we have. I know there are some questionable aspects to humanity’s journey into outer space, the use of Nazi technology at the outset, the questionable rehabilitation of Werner Von Braun by the Americans, the pollicisation of the whole endeavour during the Cold War, but for all of this-great deeds were done.

This is a poem I wrote after the event. A word or two of explanation, I stayed with some friends in London, sleeping in their spare room, which is also where they keep all their vinyl. I spent the night on a futon surrounded by racks of albums. It was very nostalgic, I have to admit I had sold most of mine years before and had forgotten the beauty of acres of LPs.

THE TEARS OF YURI GAGARIN

I had dreamt of long players,
Slept under shelves of stacked albums
On a friends wooden floor,
Lost in the spiral of the black vinyl,
That welcoming blackness that
Had held such wonder.
The sky clouded when we reached your statue,
The greatest and the bravest of us all,
You stand held in the loving curve
Of the galactic arm.
It occurs at once, unbidden:
We acknowledge you too late,
Thirty three and a third years dead today.
Our species now hugs the earth,
Bankrupt and dreamless
We have wasted your chance.

OK it could be argued that Yuri is standing on the world and the ellipse is the orbit of his space flight, but I prefer to view it as I have written, with the galactic arm holding him. I think it is poetic license, do you ever do that, change events to fit the poem/story?
You can find another poem I have written about Yuri on the Yuri’s Day website. It’s an old poem I wrote in the 1980’s. I would also recommend the graphic novel Yuris Day,The Road to the Stars, if like me you are besotted by the idea of humans in outer space.
Posted by Paul Tobin at Friday, October 21, 2011