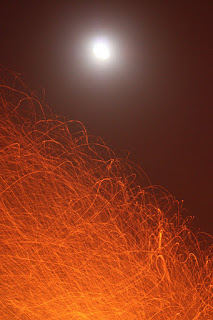 Time is elastic, sometimes, as Bob Dylan once sang: Time is a jet plane, it moves so fast, at other points it seems to crawl. Ok, so far, so clichéd and bland. Perhaps this is because the rhythms of the various parts of our lives are different? Some are fast, for example, Lapwing Publications (http://www.freewebs.com/lapwingpoetry/) are soon to publish my second poetry book. When the first was published six years ago I remember thinking that it had taken me up to that point in my life to write sixty or so pages, yet here I am with another seventy or so being readied for publication.

And some are slower. I spent the last weekend writing the third issue of CO2, I have a goal of finishing the scripts-if I can, of the first four issues by the end of the year. I had half completed the script of issue three but was unhappy with the direction and which characters had taken the initiative. This is how I write, half plot driven in that I know where I want to end up and half character driven in that once realised the characters act in certain ways. By Monday afternoon I had completed it to my satisfaction and sent it to the artist.

Later in the week I had a meeting with the publisher to discuss timescales. Essentially it will take some time to turn my wordy script into a comic and as CO2 will be produced to the European comic format (that is 48 pages as opposed to the American format of 24 pages) we are looking at publishing one a year. With the zero edition (this is the taster that establishes the name and whets the appetite) being launched at the Cardiff International Comic & Animation Expo (http://www.fantasyevents.org/) the 26/6th February 2012. The first issue will be launched at the following year's Cardiff Expo.

This is what I mean when I say different parts of our lives run to different rhythms. Do you have experience of this; do different parts of your life run at different speeds? I am reminded of the record deck of the stereogram we had when I was a child (that’s a stereo record player and a wireless built into something the size of a sideboard - all the rage in the early 1960’s). You could run the turn table at seventy eight, four five or thirty three and a third revolutions per minute to accommodate either an old 78, a single or a long player. This metaphor chimes with me, does it with you?