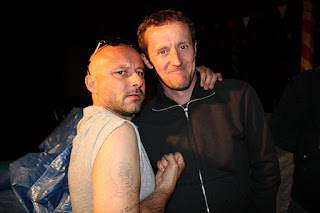 I am writing a special post today about a poem that I was sent after the Purbeck Folk Festival; it was written by the man who inspired Dave’s Henna Tattoo Blues and I am pleased to be able to present it to you. Dave is the one sporting the wonderful tattoo.

I met Dave on the Friday night at Purbeck and he told me that he had come to the festival as part of a Stag Party. On the Saturday morning I met the rest of the group and gave them an impromptu recital as we stood near the entrance to the festival. Later that day Dave showed me his tattoo and over the next twelve hours or so I put together a rough version of the poem. On the Sunday I read it to his group and later, as you know, refined the poem and posted it here.

The End of the Bloodline.

An empty room, touch your empty self

they lay with you, oh, but not for long

because the type of seed a woman needs is good, and strong

A blackened heart, a whitened sheet

Why lose another, under pleasured lover

to an alpha mate with an aggressive gait, strangely like your better brother?

There is also an MP3 version by his band The Thai Brides, but I appear not to be able to place this in the post-if you would like a copy please email me and I'll gladly send you the MP3.

I would be interested in your opinions on the poem and the MP3. I hope to be able to present some other writers who were at Purbeck in the coming months.