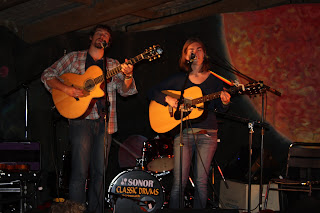 I have just had to capture a bird that my daft cat brought into the house. Nollie, my witless, slightly psychopathic feline, had entered through the cat flap, making much noise. As he raced past me I realised he had a bird, a sparrow in his mouth, I caught up with him as he dropped it in the hallway, and I thought it was dead but when I bent to pick it up the corpse took wing. Much shock and surprise on my part, it flew into our work room and hid. After stalking the terrified bird I managed to throw a waste paper bin over it and after sliding a piece of card under, I carried the bird out and released it away from the house. Thankfully it flew away. Let us hope that they do not meet again.
This post though does concern birds, albeit in a roundabout manner, the birds in question are The Stray Birds, (this is their website: http://www.thestraybirds.com/ ) I mentioned them in my last post.
PURBECK FOLK FESTIVAL POEM
(For The Stray Birds)
Willow fingers, shapes on strings,
This old tradition they renew,
With all the gifts such moments bring.
In the Long barn their notes take wing,
An ancient song is born anew,
Willow fingers, shapes on strings.
Every word gains life as they sing,
Each breathing line so true,
With all the gifts such moments bring.
Connected now the past a living thing,
Their own experience the song imbued,
Willow fingers, shapes on strings.
An unknown author’s work they sing,
Each note and word connects us too,
With all the gifts such moments bring.
Their voices round this space ring,
For us who listen, time stops as we view
Willow fingers, shapes on strings
With all the gifts such moments bring.
I cannot say that this poem rattled out easily as some do, but having salvaged the first and third lines from a haiku I thought it was worth working on. What do you think?
The next post will be a special one, I have also been working on a blues about a tattoo, again this relates to Purbeck, and you can read it later this weekend.
Posted by Paul Tobin at Friday, September 16, 2011