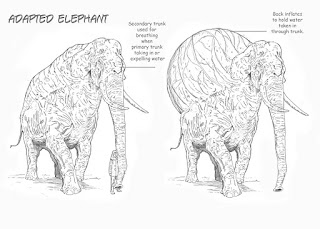 Apologies for this late post, regulars will know that I aim to post on a Friday and this week I have been unable to do so. I said two weeks ago that I would alternate between poetry and the background to the comic series CO2. Here is more about that parallel world.

I was struck by the idea that instead of using machinery the Church of the Holy Footprint could adapt plants and animals to their needs. These are the original sketches for the adapted elephants used in some of the stories. 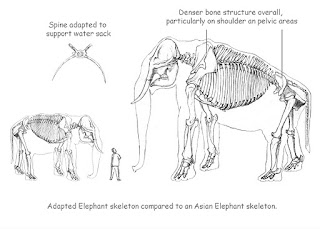 In part the idea came from thinking about Darwin and wondering that instead of publishing the Origin of the Species, what if he published a different book-The Future of The Species: The Theory of Controlled Evolution? Everything fell into place after that, it was easy to imagine animals in place of machinery, adapted elephants to put out fires; adapted horses to pull trams; a plant altered to produce writing paper.

Balancers: Their role is to balance the world; to do this they are split into many specialties. There are the obvious ones of policing the populous. While it is everyone man’s duty to balance his life and his endeavors, the Balancers ensure that tithes are paid to the Church, that there is no use of illicit machines or technology, that the populace are not indulging in “acts that would unbalance society”; these range from adultery, to tithe deception, illegal narcotic indulgence, to living an unbalanced life. The Balancer’s act as a secret police, records are kept on most of the population. Those found to be out of balance may find themselves working on one of the big re-balancing projects such as the reforestation of the midlands.

Adaptors: The Church’s scientific arm, Adaptors work in every field of knowledge. Adaptors are constantly working to alter animal species to the greater glory of God. Such work is the public face of the Adaptors, less well known is their use and refinement of the difference engines, and their mastery of information technology. Such technology is secret as is how it is used to shape society towards God’s Balance.

Adaptor’s design weapons and surveillance devices. There is much of their work that is unknown even to the other arms of the Church.

The Soldiers of the Holy Carbon: The military arm of the Church, commonly known as the Carbon Soldiers because to create the Holy Balance it is first necessary to destroy, and as destruction releases carbon dioxide which heats the world, the soldiers name reflects this ambiguity. Although since the carbon fixing adaption’s to pigs and cows, it has been possible to neutralise this effect.

Fanatically devout, the Carbon Soldiers never serve in the communities they are drawn from. Since the fall of the Dragon Emperor eight year before, there has been public talk about how best to use their skills.

The Seers of Albion: The little known steering group of the Church. A shadowy collection of individuals who it is said decide the direction of the Church and so Mankind.

There is also another group of Seers, whose role is to monitor the seven time streams, these are known as The Seers of Montserrat. They are based in Catalonia at the Holy Shrine of the Black Madonna. Their work is to monitor the seven time streams that make up the multiverse. It is thought that certain avenues of action caused the different realities to break off the main stem. These choices are known as crossroads and their detection is of paramount importance as an eighth time stream would upset the balance. It is not known how many times the Church has acted to prevent such an event.

In recent years there has been the development of combined skills, a small group of potential Seers have been trained as Balancer/Seers, their role is to ensure that the multiverse does not split into more time streams and that all potential crossroads are successfully negotiated.

On the surface the Church appears to be a grassroots organisation, the tenets are easily understood and can be simply expressed as balancing the world. This can be seen in the work of the Church to ensure that no resource is over-exploited and the energy that it expands on clearing up the effects of the wasteful industrial society keeps the world in Balance. You would imagine that the church is a Lattice-like organisation; in fact it secretly resembles a Greek Temple structure with all actions being secretly overseen by the Seers.

What do you think of this world? I do not think I would like to live there, would you?