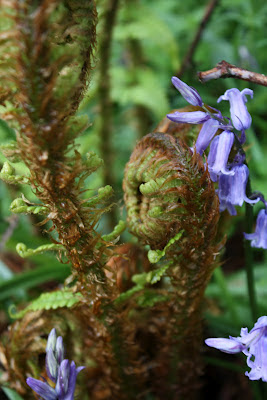 Now that spring is with us here are a couple of photographs of the bluebells from last year. Not long now to wait for them this year.

However what I mean by performance poems are those poems specifically written to be performed rather than read on the page. An example of performance poetry would be John Cooper Clarke, the Bard of Salford who came to prominence in the late 1970’s as part of punk. Here is John reading I Married a Monster From Outer Space (http://www.youtube.com/watch?v=q6emQpBXe5Y&feature=related). John was a great influence on performance poetry. Here is Attila The Stockbroker performing A Bang and a Whimpey (http://www.youtube.com/watch?v=om24vFEStvw&feature=fvst).

Last nigh I was involved in a discussion about the differences between performance and written poetry, though I suppose all poetry was oral at one point, and still is in some cultures. To continue with Michael Langley’s metaphor from the last post, that prose is beer to poetry’s whisky, perhaps performance poetry is more like beer.

Many performance poems appeal to the ear more than the eye; when you see them on the printed page they do not work as well as when you hear them. I have to say at this point I am not trying to say one is better than the other. In fact I do consciously write poems that are meant to be spoken aloud. When you are on stage at a festival you have to capture attention of the audience, a sonnet at times will not do the trick, but something that is designed to be spoken loudly will.

I think the gist of the discussion last night was that poetry is meant to be lingered over, and that is easier for people in our culture to do when we read it. Perhaps the strength of performance poetry is that it takes us back to those times when we listened rather than read.

I cannot close without mentioning Beaseley Street By John Cooper Clarke, written in the early 1980’s Beaseley Street is a hugely ambitious work that contradicts all I have said about performance poetry. It works on the page, it works on the ear and in this version it works with a band (http://www.youtube.com/watch?v=XZymVWuMKVk&feature=fvst ). At the time I always thought Beaseley Street was John’s answer to Desolation Row by Bob Dylan. I suppose this was partly because John looked like a dead ringer for Dylan in around 1966.

Here is a poem I tried out last night and intend to recite at the festivals I am at over the summer.

HOW TO GET TO THE MOON

Try a long ladder, but take some butties along in a resealable box, it may be a long climb

Tie balloons full of helium to your arms. Tip: when you inflate them think Bill Clinton and do not inhale otherwise the Selanites won’t understand a blinking word

A trampoline won’t do it, you’ll just get a headache

Trick a flock of birds, harness them to your favourite item of garden furniture, perhaps use seagulls, but be careful, they may lead you a merry dance

Stowaway on a rocket, it will be a tight squeeze, ensure you are not in one of the booster stages than fall away and burn up on re-entry

Or fly there in your head, faster than a moonbeam made up of Higgs-Boson particles, expect to be disappointed, it is either too hot or too cold

The moon is nowhere, necessary but nothing to write home about, everywhere really interesting is so far away you would not believe the distances involved

Sleep now, the coming day will make you believe you could touch the sky and scoop the sun in both of your hands

But remember, all this is an illusion, it only looks real

(A word of explanation for those not brought up in the north-west of England butties are sandwiches.)

I am the festival poet at The Acoustic Festival of Britain (http://www.acousticfestival.co.uk/ ) and John Cooper Clarke is on the bill, why not come along and see both of us.