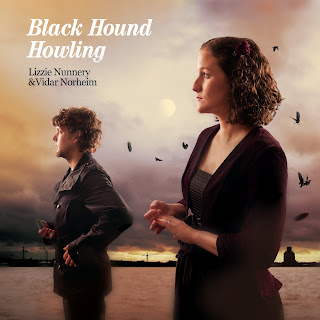 Lizzie Nunnery and Vidar Norheim have released their new album today (http://www.lizzienunnery.co.uk/). It is available in all the usual places itunes, emusic and from the website. I want to use this post to review it as I think it is excellent and a contender for my favourite album of the year.

I have to admit right at the beginning of this review that I asked Lizzie for a review copy of the cd. I did so for two reasons, one that I wanted to review it and the other is I was really impatient to hear it, especially after I had caught their performance in Glossop. I have been listening to it for about a month now.

A little background for those of you who have not read the interview I posted a while back. The multi-talented Ms Nunnery, playwright, poet, musician and songwriter released an album in 2010. It made my top ten of albums of the year. There were a mixture of personal and political songs and it was firmly rooted in the north-west of England, where I had grown up. Lyrically it was rich, romantic and passionate. In short it ticked all the boxes.

So, the new album. It is produced by her husband and co-performer, Vidar Norheim, himself a talented musician and a member of Wave Machines (who are really worth a listen, but I digress) and The Solid Air Band (a John Martyn appreciation band). Vidar was named in 2011the most promising song writing talent in a competition in his native Norway. This guy is a serious musician and live the rapport between them is a joy to behold.

So what’s so amazing about this new album then?
For a start the sonic palette has broadened, there is a sophisticated musicality to the album. It is well recorded and the arrangements underline and compliment the songs. There is a richness to the arrangements that adds to the listening enjoyment, that draws the listener into each song. You can tell this album is a work of love and passion.

Lizzie’s vocals have taken on a new strength as well, this is evident from the first words she sings: They say the end of the world is coming. Here is a singer who has echoes of an Old Testament Prophet, there is anger. Her passion and humanity ring out.

And the lyrics are as good as you would expect.

For me a number of themes are explored, there is an apocalyptic feel to some of the songs, there is a political commitment to our humanity in other songs, and always there is love. Inevitable, inescapable, and ultimately redeeming love. I take my hat off to her lyric writing skills.

Let’s start with the apocalyptic. The opening track on the album Evensong has this for the second verse:

This is a rich brew, there is much to mull over just in those four lines. I like the visual, kinetic images she has assembled, broken ice, falling rocks, the idea that a landslide can be fierce and of course the stopping clocks. Lizzie lyrical skills have developed at a prodigious rate since the first album.

But this song is not simply a catalogue of the end of times. What stands out is the final line:

I’ll be yours ‘till every bright thing fades.

Here is the first example of the redemptive power of love. The narrator cannot do anything but give their love to another, even at the end of the world there is the redemption, in the face of all this, of unconditional love.

This is continued in the second track Five Thousand Birds, apparently based on an actual event when five thousand birds recently fell out of the sky in America. Here the narrator sounds even more prophet-like:

Visions of the impending disaster continue on the title track Black Hound Howling. The opening lines illustrate just what a superb songwriter she has become:

As I say though there is more to this album than a pointing finger telling us of the approaching disaster, there is a questioning of the current political situation and the assumptions and platitudes that are banded about by politicians. The penultimate track Don’t Look To Me questions the assumptions at the heart of the Tory’s so called Big Society:

In all the vast acres of your society
It seems there's not a single corner left for me:
A single unprofitable commodity
Don't raise your head
Don't raise a hair
Don't look to me

This questioning continues into the final track Poverty Knocks. The chorus is simply stunning:

Not only is this a condemnation of the contemporary obsession with celebrities and reality television, it highlights how the economic situation and the reduction of social care and support has brutalised us all. There is also a subtle reference to Leonard Cohen’s song Suzanne, the second verse of which states that Jesus was a sailor who realised that only drowning men could see him and therefore says that all men will be sailors until the sea shall free them. This is its turn references Robert Lowell’s poem Quaker Grave in Nantucket, possibly one of my all time top ten poems.

The song continues to question the fallacies of the present government and their callous approach to those of us who require support.

When the day breaks in with an aging face
When breathing in is a breathless race
When nothing you own is your own, when your place
Is somewhere below the line tucked away

I cannot end this review though without mentioning the beauty of the lyrics. That Lizzie is a fan of the Beat Poets is obvious on Cherry Blossom Tree, one of the two spoken word tracks. I was reminded of St Jack himself:

This is so beautiful. As is the opening of The Cold Has Come:

What Lizzie offers us is humanity and the redemptive power of love:

Listen, this is a major album. It is part of the grass roots change that is coalescing around us, in every town, on every continent, as much as is Annabelle Chvostek’s Rise and the work of Sean Taylor.

There will be love.
Posted by Paul Tobin at Monday, September 17, 2012