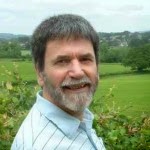 There is an energy about John that is infectious. He is one of those people that you have to admire, always there in the thick of it, supporting and facilitating others. Not only does he chair Taunton's Fire River Poets but he also facilitates their monthly poetry evening and co-hosts poetry events with me. He is a pleasure to work with, laid back and charming but with his eye on the ball.

I have always been impressed with John's poetry. There is quality, not a spare word, or awkward turn of phrase. He is a poet to savour and to return to for repeated rewards, there is much to reflect in his work. I am excited that Fire River are compiling a new anthology and that he is working on his second collection, his first Word of Mouth was excellent.

But enough of me let's hear from John:


Why poetry?
I originally wanted to be a composer of music of the high classical kind but slowly came to accept that I had little chance of success. I was about 10 years old when this ambition arose. And I didn't understand the educational pathways that could lead me to that goal. Perhaps more important at that stage, neither did my parents …
But I had a second string to my bow: I liked writing stories. Although I had relatively little exposure to poetry, I did know what it was and liked, for example, John Keats's A Song About Myself, or at least, that part of it which is most often quoted, Part IV:


There was a naughty boy,
And a naughty boy was he,
He ran away to Scotland
The people for to see –
There he found
That the ground
Was as hard,
That a yard
Was as long,
That a song
Was as merry,
That a cherry
Was as red,
That lead
Was as weighty,
That fourscore
Was as eighty,
That a door
Was as wooden
As in England –
So he stood in his shoes
And he wondered,
He wondered
He stood in his
Shoes and he wondered.


And a few other poems.
But at Secondary School, I turned against poetry when we had to study the Romantics in detail, because I found much of it turgid and boring. And it wasn't until I was about 16 that I had the Damascene conversion that changed my attitude – and my life: I came across Eliot's The Four Quartets in the school library and out of curiosity started to read it. I was transfixed! I read it from cover to cover, including an introduction that I didn't really understand. It seemed to me that this was the kind of poetry I could relate to and wanted to write … and I've been writing poetry ever since.


Tell us how you work
Now that I'm retired, I sit at my desk every morning, if I can, and work on poems. I don't believe that I have to wait for inspiration to descend on me. Selecting what to write about is not a problem and I simply work until the poem sounds right or is abandoned. There is not a lot of 'inspiration' in what I do. I'm not even sure I believe inspiration exists. I get good ideas and I get obsessed, but these aren't that high spiritual 'gift' of inspiration that so many people seem to think is the conduit through which art is brought into existence.
What poets make you green with envy?
I have had a special regard for many poets at different periods in my life. Having to study poetry in so many languages – I have O Level in English, O and A Levels in French and German and BA in Russian – I have had a wider range of poets to choose from compared to the average.
However, I'm not sure I envied any of these poets. Certainly not all of them, anyway. I was gobsmacked, disturbed, intimidated by quite a lot of them because their work was so 'perfect'; they were such 'geniuses'. It took quite a while for me to realise that genius, if it exists, requires hard work and dedication and is not innate.
OK, if you insist that I choose one poet, I'm not sure it's fair, but I will. For many years, my great star was Rilke, particular his later work. Head and shoulders above all others. But nowadays he is only one among many whom I both admire and possibly envy. If you insist that I must envy someone, it's him.
Tea or coffee?
Coffee – no contest. I am addicted and have to ration myself. However, I do drink a lot of lemon and ginger tea, too.
The lemon and ginger tea is because I actually gave up caffeine many years ago. I felt it was causing me harm. However, after some 15 years almost entirely caffeine free, I've slid back and now allow myself coffee at weekends and when I go out.


What question would you like me not to ask?
There are quite a few taboo questions that I wouldn't dream of revealing, but I suppose the one I'd dread most in terms of my poetry is: why are you so secretive?


How would you answer it?
This is difficult to explain. When it comes to the matter of my own self or the role I most value: being a poet, I have always been secretive about what I'm doing. I suppose it comes from my formative years, when I felt that I was surrounded by people who were different from me and to whom I had to concede the right to expression. Which meant I must not compete to express myself and had to remain silent, keep my work to safe, under wraps.
But later, perhaps as late as my late forties, I realised time was flying by and I had to force myself to open up at least a bit, which I have done and am glad I've done. However, there are still times when I find it difficult to credit that people would value what I have to say.
As for letting anyone see and comment on my work in progress, no. I never could and still can't bear that. A poem has to be utterly secret until it has been put in its final form. Even its title is not to be revealed because that would stop any further work on it.

The only exception is that I will take some poems in near final form to meetings of poets and accept comment from fellow practitioners. I can tolerate their comments because they are people like me.

I'm working on a second collection and also collaborating with other members of Fire River Poets to produce our third Anthology. No publication dates for either at the moment as it's too early in the process. 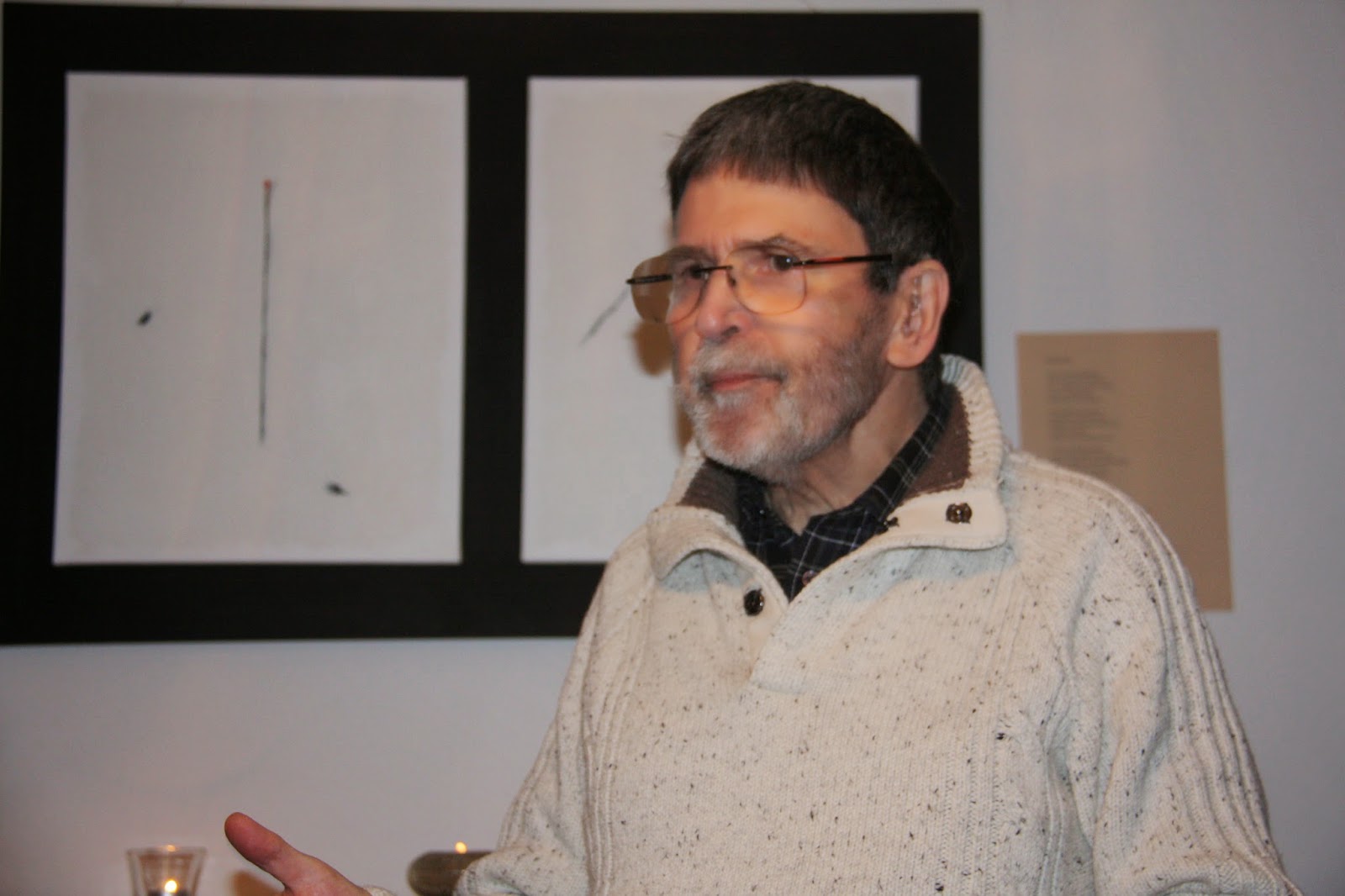 If you were a poem what poem would you be and why?
It's a toss up between quite a lot of favourite poems, including Sonnet to Orpheus No 56 by Rilke and Seamus Heaney's Squarings viii (from his collection Lightenings), but overall, I think it would probably be Robert Frost's The Road Not Taken. Not because it's better but because of what it says.


This fabulously simple poem sings to me of the dilemma of decision, of choice that I have faced so often: which way should I go? … I am a hesitant and indecisive person underneath all the hurry and worry. It consoles me that my stupidities can be validated in some way by how things work out, indeed they have to be part of what has helped to bring me to this point, which I am by no means unsatisfied with, however late in my life it may be. So the road I took has to be the one that made the difference.
Poem selected
A hard choice! I have decided on a poem from my collection, Word of Mouth (Oversteps 2009), called Intruder. The last line of this poem echoes the last line of Heaney's poem Squarings viii mention above:


It was hot. Hunters for insects were in the air,
whirling round the castle and the grounds –
above the human swirl which passed into the castle


and no doubt sounded to the hurtling birds
like mammoth beings trumpeting their deep greetings,
bellowing their slow laughs. Ponderous beasts

sucked up by the immortal rock. When a swallow
chased some small thing into the conference room
and its darkness sensors clicked in and its flight


as though it had flown in to find us and make
an announcement. But it searched the walls, the space


in which we had confined ourselves – and,
without a false beat, left by the open window
through which it had come. We cheered its bold departure.

Not for the bird that was focussed on escape.
For our leaping hope as it swept out into the air;
for the sense of the marvellous we hold in ourselves.