THE NEWS FROM PURBECK 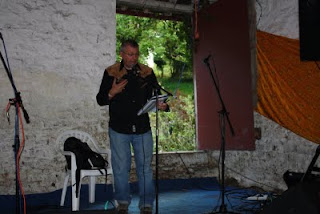 What a weekend! I think I shall start with some impressions:

More people than last year but the site did not feel crowded and importantly it was easy to get drinks, no queuing for hours.

Such a high quality of music, and a good variety of styles and acts, as people said to me more than once over the weekend, Purbeck is like festivals used to be and is to be cherished for that.

As festival Poet I found the whole weekend well organised and everyone was friendly and open to poetry.

The Freeway Circle of Poets were very entertaining. I enjoyed listening to every performer in the group, as well as the Princess of The Woods who joined us in the circle. More of the Freeways Poets in a later blog when I have edited the video I shot of them on the Open Mic Stage.

My workshops were very well supported and some interesting work came out of them. I am waiting for the participants to send me their work, again more of this in the coming weeks.

Musically for me the high spot was The Stray Birds, Maya de Vitry and Oliver Craven, two multi-instrumentalist who play a blend of traditional Appalachian music and original American folk songs (to quote the festival programme). For me they were simply spellbinding, they played twice during the weekend and for me time stopped on both occasions.

I also enjoyed The Outside Track, Not Made In China, Po’Girl and “whistle genius” (that’s the programme again) Brian Finnegan playing on the Open Mic Stage late into Friday night. In fact for me the Open Mic stage was a real treat and thanks to Steve for managing the Open Mic for the whole weekend and providing such excellent sound.

I also have to say it was great to see Quinns Quinney end Saturday night in their unique manner for the third year running. What stars!

Now to the poetry, on the Saturday the workshop produced a joint effort. We worked on some Haikus – again more of these in the coming weeks, as well as on a group poem. We managed to get this into a basic form:

So easy was it, they all thought, but knew not how I felt

-Yes! I want that! It holds my attention

Sensations in my chest, as my skin awakens,

Each second an age.

I can’t keep still! I just have to move my body,

He wants it all, that sweet small child;

Finally you’ve got to go to the planet you always wanted to.

I have been working on this for the last few days along with a couple of poems that I began over the weekend. Now while there is nothing at all wrong with the poem, the perfectionist in me wants to work on it. If you remember the other week I offered some tips on writing poetry and one of these was to ask if the poem still works if you take a word out, I think poetry is by its very nature is lean, there should be no excess fat. I also stressed that we have to revise and revise. So here, with apologies to the wonderful writers who attended the workshop; is a revised version:

They all thought it so easy,

But it holds my attention,

Each second is an age as

My face flushes with anticipation,

He wants it all and has got to the planet

As you always wanted to.

Ok, if this poem is about expectation, have I made it clearer? To an extent I must have because the group agreement has been replaced by my vision, I have altered the people’s words to make a shape I find more satisfying. However, as with all poetry, I do not think it is there yet. Watch this space for more revisions.

Listen, why not have a go yourself? Look at the original then do what you will with it and send me the results I will be happy to put them on the blog.

Here is a couple of Haikus that I wrote on the Saturday, the bass line refers to the music from the food stall next door that seeped through the canvas.

My ear follows it

A sonic web around us

Silent we all write

I want to end this week’s very long post by thanking a number of people, firstly all those who came to the workshops and produced such quality work, thank you. And thanks to Paul Burke, Catherine Burke, and the rest of the festival organisers for inviting me. The date for the next festival has been set for the 24-26 August 2012, do yourself a favour, get your tickets soon.