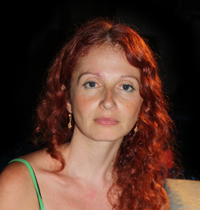 Pre-contact America has always fascinated me, ever since I was a child and I first came across accounts of the Aztecs. It seemed somehow alien, so different to my experience growing up in the north-west of England.

This fascination has never left me. I watch anything about the Americas on television and have over the years read many history books on the subject. It was then with some interest that I encountered the work of Zoe Saadia. I was intrigued by her tweets about her novels and this has led me into her richly imagined world. 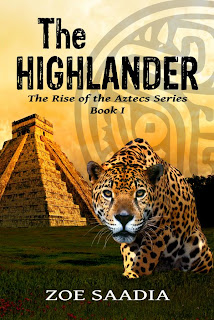 Zoe writes from a position of knowledge, she has spent over ten years researching the cultures of the Americas. Her blog is well worth reading, immediate and knowledgeable. As are her novels, they draw you in and leave you wanting more at the end.

As a historian what drew you from Ancient Rome to Pre-Contact America in the first place?

Well, pre-contact America was always the one who drew my interest in the way I could not resist, although logically it should not have happened, as I was born on the other side of the globe. So actually, ancient Rome was the one to draw my attention away and not the other way around.
There so little literature concerning Ancient Americas, that at some point one can’t maintain one’s interest, and have to move on. Republican Rome offered me a very nice diversion, with plenty of fiction and non-fiction, with non-stop action and the most fascinating politics, this transition from a democracy (even if an imperfect one) to the absolute monarchy.
Back to Americas I returned only when I knew what I was planning to do with my life, which is to fill this void, to deal with this lack of good historical fiction on its per-contact history. Ten years of research presented to me a continent full of life, of bubbling politics, shifting powers, empires and democracies, war and peace treaties, all prior to the 15th century. To the contrary of the popular belief, both Americas were mostly agricultural, therefore well settled, with plenty of time to grow great cultures, political systems and interesting clashes between some of them. It presented me with a rich field of cultures and events to choose while looking for good stories

How did the idea for your first novel come about?
Being an avid reader of James Clavell, I wanted to create my own Shogun-of-the-ancient-Americas. The situation of a strong, fairly open-minded man thrown into an absolutely foreign society to him, discovering it slowly and painfully, drawing into it against his will, fascinated me greatly. This way I could also present two different cultures, making my point of the diverse pre-contact North America stronger – shooting two birds in one shot
This is how the idea of “The Cahokian” was born. The monarchist Mississippians against the fierce democratic Iroquois of the Great Lakes. A somewhat ambitious undertaking and, being the first novel, it definitely has its flows (this book is being rewritten and proofread again through this month). But all in all, it did drive the point home. 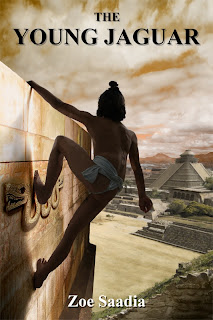 In your "Pre-Aztec" series you write about the Tepanec Empire, how much of this is based on archaeology and how much have you had to use your imagination?

Oh, the Tepanecs were more difficult to deal with than the Aztecs. I have to admit I did use not a little imagination (but not as bad as with the Mississippians of my first novel, whose research was based solely on archeology and nothing else).
The Tepanecs were the regional superpower that held the Mexican Valley and its cities-states and provinces, Aztecs included, in its firm grip for a few decades or more. But as soon as the scales tipped and the Aztecs and their allies took power, a serious effort was made to re-write the history. Reportedly the winners went as far as destroying many previous records and even burning books. There were great libraries in Texcoco, the city-state that was never subjected to the Aztecs, but those libraries were destroyed in the Spanish conquest that came a century and a half later.
So, while we have a fair amount of ancient records concerning the Aztecs, we don’t have much on the preceding Tepanecs. Which forced me to guess some of the customs and everyday’s life’s tidbits, basing my assumptions of the later-day Aztecs and their neighbors.

How do you keep up to date with developments in the field?

Luckily I have great friends in Mexico-city to keep me updated on the important lectures concerning latest discoveries that are sometimes held in Temple Mayor museum. Also the internet helps a lot. There is not a day upon which I don’t bless the internet and the wonderful possibilities of reaching all sorts of information and connecting with all sorts of people it has opened to us. 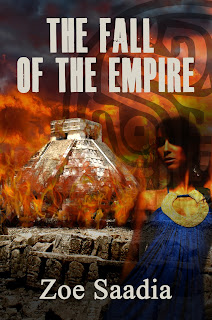 What would you do differently if you had the chance?

Nothing that I can think of. Ok, maybe my location. I would love to be born in the lands I’m fascinated and in love with. To live on the other side of the globe, doing the research and interacting with friends and colleagues whose day is when my night is, is a bit challenging.

If you could go back in time where would you go?

Oh, this is a tricky question. There are so many locations and time periods! If I’m allowed to pick a few, then, of course, I’ll be off to 13th-14th centuries Central and North Americas, to make sure I got my facts right.
After wards I would detour by Caesar’s Rome, and then maybe take a quick tour through Spain and Italy of Hannibal’s time.

Oh, now that I officially finished with the rise of the Aztec Empire (the last book was sent to the editor two day ago), I’m moving back to North America. The Great League of the Iroquois with their unprecedented democracy and constitution and the way it had been created, is definitely worth a thorough representation in historical fiction.

If you were a colour what colour would you be?

Either red or turquoise. It’s difficult to choose J