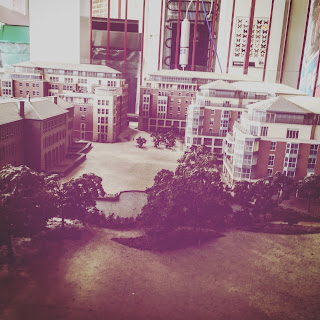 I am a little hesitant to share this poem. I am breaking one of my self-imposed rules; never show new work. This is a poem I've been working on for the last couple or three weeks. It is significant to me, and that is the worry.
Distance grants perspective; I am possibly far too close.
This is how it came about. One morning I was watching a cleaner hoover the wonderful architectural model that you see in the photographs. It is of the original Chelsea site of [what at the time was] the College of St. Mark and St. John. I am told it was made in the late 1960's prior to the college moving from London to Plymouth. It is located out of the way, under the stairs where you have to look hard to see it. You cannot get near it unless you move the photocopier out of the way. 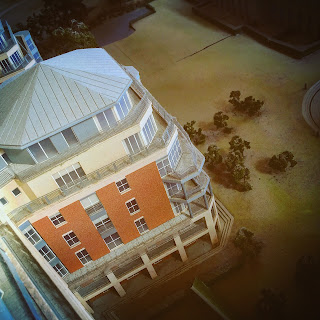 Seeing the grass being hoovered make me think of The Kraken Wakes by John Wyndham and there I was in one of the buildings watching.
It also made me realise how higher education has changed since I was a student in the early 1980's. The idea in those far off days was to give people an education for life rather than to simply fit them up with an education for a vocation [and saddle them with a huge amount of debt in the process].
In short, I felt as out of place as the architectural model that morning.
Here's the poem.

He is hoovering the architectural model,
on his back sits a vacuum cleaner,
streamlined like a jet pack
from some 1960s science fiction film,
but this is the future.
The model's location telegraphs irrelevance,
it has been abandoned under the stairs, half out of view.

Hunched over, the cleaner is finding it difficult to work,
stretching to vacuum the green fields,
and filling my bottle at the ice cold water machine,
which further obscures the model,
I wonder what it would be like to be in one of those houses,
say Hudson or Stanley, so professionally reproduced in front of me.
That giant nozzle is sucking up boulders of dust,
as if the Kraken had woken to steal the world from us.
Would I run in fear through the empty building to hide in a basement,
or to the glass walls of Hudson's top floor,
phone recording with half an eye to television news?
Afterwards I know I would walk through the deserted gardens,
film the trees loaded with dust that are too difficult to clean.
Be cowed by the concrete sky above me
and not like the modern world at all.

Later I move the barriers,
and crouching photograph the model.
Was it all pulled down once the college left Chelsea for Plymouth?
Before it all went wrong.
It is clear that present management has no time
for the model, or the past,
except as a tag line on the corporate logo.
Education for life has been supplanted
by a phoney promise of vocational learning.
If things carry on like this,
we will all be ruins awaiting archaeology. 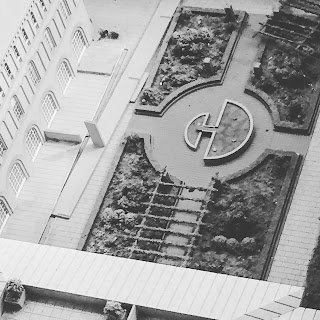 On a less sombre note the mellifluous Oscar Sparrow is dropping in to offer a guest post on Tuesday. What can I say? The man is a living legend and a joy to read or hear.
In his honour I leave you with Edith Piaf.
Tune in on Tuesday!
Posted by Paul Tobin at Friday, May 06, 2016

Email ThisBlogThis!Share to TwitterShare to FacebookShare to Pinterest
Labels: Marjons