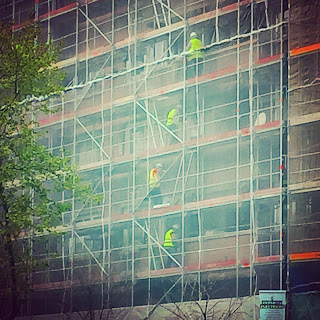 Apologies for reusing a photograph I've already posted but strangely enough I have few pictures of scaffolding. In actual fact I have one photograph of scaffolding.
Last Friday I was in a friend's car and we had to stop for a lorry loaded with scaffolding equipment to manoeuvre into place so as to make the  unloading easier. I happened to say "You need optimism to be a scaffolder". I was thinking of the times I have seen them balancing on bars to construct these amazing frames inside which something will happen. This set me thinking 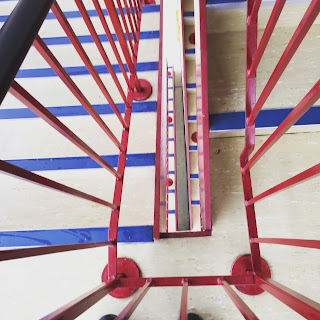 You Have to be Optimistic to be a Scaffolder

Balanced on a horizontal bar.
Up there, in the zone,
bolting in a supporting spar,
you need the knowledge, faith as well,
to sketch a safe perimeter,
build another’s workspace,
and when the tower is assembled,
and when the learning‘s done,
like a strip of film run
the wrong way through the projector,
piece by piece, you take it down,
to construct the next nurturing shell,
which in its turn you’ll dismantle,
to start from scratch again. 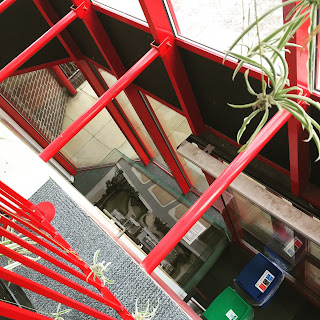 I think it is a pretty straight forward poem. It is not yet complete. It requires work-watch this space [as you would scaffolding being erected].
Here's Bottle Top Blues by Brooke Sharkey. It's just been released as a single.
Until next time.
Posted by Paul Tobin at Friday, January 27, 2017