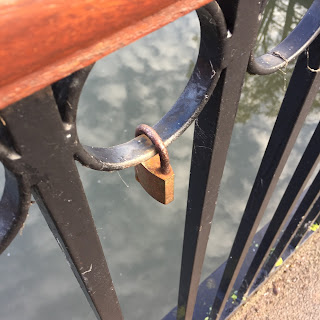 On Christmas Eve I noticed that people had begun to put padlocks on to the handrail of the footbridge by the Brewhouse Arts Centre here in Taunton. I believe the padlocks act as a physical token of a couple's love and the placing of the lock is a symbolic act of unity. There is a bridge in Paris that was until recently the locus of this behaviour.
The idea germinated over the festive season and I wrote this:


Pinned by an arrow through her heart until it broke,
she had gone to get herself an education
and trace the currents in the confluence of events
that had led her and him to stand on that bridge,
fasten a padlock to the handrail
and each to cast their key into the sunset water,
for they knew they would never unlock their love.

Council cuts meant that the bridge went unpainted.
The allegedly rustless lock now tainted by atmosphere.
Her levering screwdriver dragged the hasp
screaming from an eight year sleep,
then it became a weight on her palm, she turned her wrist,
the broken mechanism rushed towards the water.
There was hardly a ripple. 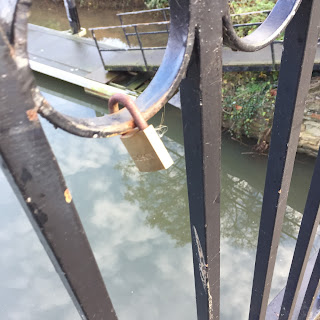 I think the character's motivation to get an education needs expanding, and thanks to the Secret Poet's for their observations.
I managed to spill a cup of tea on my laptop on Boxing Day which I thought had murdered it. Surprisingly it has sprung back from the dead [for the moment...]. 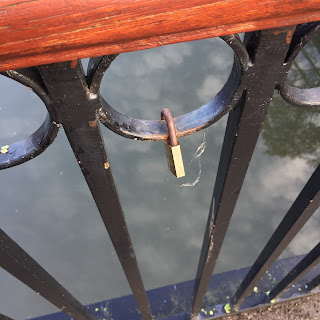 I have been listening to a lot of Nick Drake recently, here's Northern Sky.
And for all you obsessives out there here's a song from his John Peel session that was thought lost for many, many years.