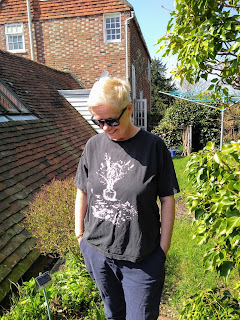 I recently participated in a workshop focusing on exploring the under story of a poem. The aim being to enable the poet to perceive the creative process from which the poem had sprung, the issues that had promoted the writing, the space where poems are created. The aim was to create a dialogue between the poets in that space and see where it led. It was fascinating stuff facilitated by the wonderful Charlotte Gann.

A brief word of explanation about the layout of the interview. Since blogspot updated their platform I have been experiencing difficulties with spacing and because Charlotte's poems are so exquisite I have decided to use photographs of the poems rather than blunt their beauty with coarse spacing.

Charlotte is an accomplished poet, but rather than me bigging her up let's hear her talk .

Tell us about the new collection

Well, it’s not THAT new any more – but did come out in lockdown. The Girl Who Cried, my second book from HappenStance. The poems are title-less so sort of run into each other. Some of them are illustrated or accompanied by little line drawings. The book’s an exploration and admission, for me: every day of my life, I’ve lived with longing, arguably as a result of early attachment difficulties. ‘The Girl Who Cried’ of the title is a core part of me.

Lots of the poems are short: I thought of them as ‘woodcut’ poems as I wrote them. 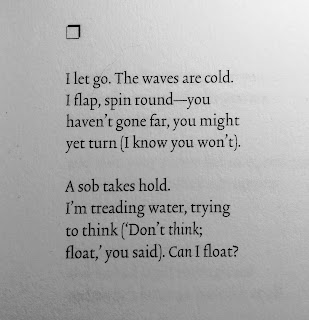 Um.., you’ve just named my three favourite things. I called my first book Noir partly because people said how filmic the poems were. I love film, as a medium. The palette, the framing. Music has always been central for me (when I was young, as this picture may suggest, mainly Bowie). 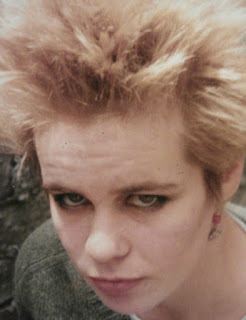 And then there's been poetry. Ah, poetry... From Keats to Stevie Smith to TS Eliot when I was young to…..ALL my touchstone poems today. (Right now I’m working my way through the Collected Poems of Raymond Carver.)

So probably a poetic film with music.

I want them to sense the life in the poem. Recognise it – something palpable. I’m interested in that place where thought and feeling meet; my poems are my emotions distilled, framed. It’s been about trying to find language. I want a reader to notice if they have that feeling in themself. I’m curious about resonance, and often writing about the other side of that coin: loneliness. If a reader recognises the emotion maybe that leaves us both subtly less isolated. I know that’s the effect reading can have on me.

I’ve focused a lot of my poems on areas of my life that caused me distress over decades, however ‘irrationally’. All I can do is share my feelings truthfully. So that’s what I’ve done. I wanted to leave a record: a kind of refusal, eventually, to suffer in silence. I like that adage cited by Banksy(?): art should comfort the disturbed and disturb the comfortable. Yes.

If you could become a character in fiction, or film who would you be and why?

One of those good, grounded policewomen. Catherine Cawood in Happy Valley. Marge Gunderson in Fargo. Most recently, Mare Sheehan in Mare of Easttown. In fiction, my favourite characters are ones I massively empathise with – George Harvey Bone in Patrick Hamilton’s Hangover Square, Frankie Addams in Carson McCullers’ The Member of the Wedding. I wouldn’t want to be them though. Too close to how I am already.

How far does real life creep into your work?

It’s there at its core – as in, my work is totally truthful. Emotionally so.

But in another way, my poems topple ‘real life’ on its side: I’m interested in showing the underbelly, the stuff that’s normally hidden. Unobvious loneliness.

Since writing the books, I’ve started calling this my ‘Understory’.

Abuse of power, in all its guises. Exploitation of vulnerability. Nothing makes me angrier than this. And it makes me angry on a daily basis.

Potatoes. And cats. They’ve both always comforted me.

What would be your dream project?

My dream project? The question makes me happy. I’ve always pictured this imaginary set of rooms where people come and meet and talk. I’ve been there forever, and am somehow pivotal. Whatever the precise function it combines all my passions: writing, expression, group-work, therapeutic heartful communication practices… Maybe I’m trying to work towards this now, with my project The Understory Conversation.

How do you navigate the poetry world? I have some firm allies and circles. Friends. I talk to other poets; read books; review pamphlets for Sphinx; convene local readings with the other Needlewriters: so I’ve found modest, regular ways to contribute. I’m in a number of groups. I try not to worry too much about prize lists or noise or to overly focus on social media. I try to keep things in perspective. I have found my little corner.

Plus, increasingly, I picture this scene, like a cartoon or mantra (a friend drew my attention to it originally, and he is not a poet):

“The poet is to give a reading from his new book… the dutiful publisher carries a dozen copies of the poet’s new book to sell at the reading… Now it is over, and the publisher gathers up the unsold books, counting them glumly… he trudges home, weary and puzzled – How can thirteen copies be left over from a dozen?” ['DJ Enright, from his collection Under the Circumstances: Poems and Proses, Oxford Poets, 1999.'] i.e. poetry’s a very strange old business! A way of being safely i.e invisibly visible? Gotta love it. 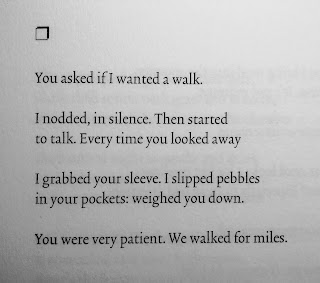 (both poems from The Girl Who Cried, HappenStance, 2020)

Thanks Charlotte, I honestly cannot recommend The Girl Who Cried enough. Do yourself a favour and get it here.