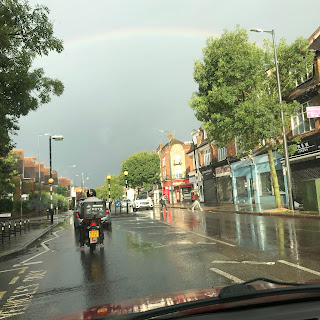 I am always amazed at how poems write themselves. I take a selection of seemingly random events and somehow they write themselves into a poem. Yes, I know, it is not that easy. There is the mind's selection of the experience/event, the ordering, the adaption into something greater and the hours of revision. But the end product usually surprises me.

For this poem I should stress I was not the driver.

he was complimented on the rainbow

that had over such a short period of time

tumbled from out of the sky


he worked on the accompanying story


his focus always on the man in the vest and shorts


as he panted to the supposed shelter

of a tree that became sparser

and less protective with each retelling


perhaps that was the point 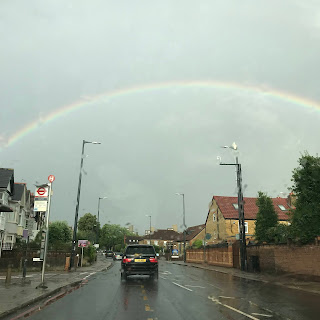 Can anyone tell me how to alter the spacing on this new platform? It is, to use a technical term - pants.

Much rain fell last week and my thoughts are with those poor people flooded out. I think we are sleepwalking over the abyss as I write.

By the way the praise for my photographs of the rainbow was made up, as I think you can tell from the actual photographs. 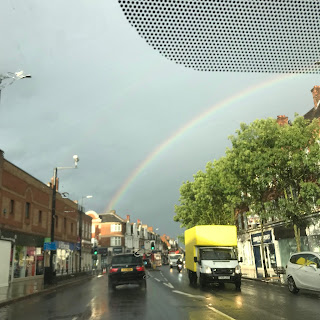 The rainbows made me think of this song by Marmalade. I think it's from 1970.
Here's their other song. Ah, the wonder of psychedelia!
Until next time.
Posted by Paul Tobin at Friday, August 06, 2021