BRISTOL IN THE RAIN 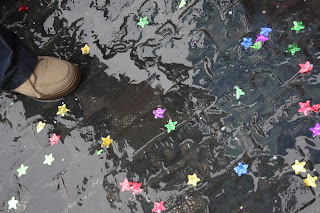 I am cobbling this post together before I drive up to Leeds, a five hour drive on a Friday, for my brother's 60th birthday party. Sixty years on this earth, amazing. Though the nearer I get the younger I think sixty is.


It was my birthday the other day and my daughter came to Bristol with me for the day. We were looking forward to a Lebanese meal, both being big fans of middle eastern cuisine. As we neared the restaurant it began to rain (hence the mangling of the Al Stewart song for this week's title), and when we found that they had closed for good it began to rain, stair-rods, as they say. During the day I kept writing haikus in my head and scribbling them down when I had the opportunity (-yes I am fun to go out with! It's a good discipline to get in to, try it sometime.)


Anyway here are my humble attempts to describe a day.


Broadmead in the rain,
A vast expanse of concrete,
There is no shelter.


Lazy meal, much talk,
Day rescued from disaster,
Sun creeps out of clouds.

Why not write a haiku yourself? Have a good weekend.